CSTA's Board of Directors has placed a very high priority on the development of broad coexistence plans for organic, conventional and GM production systems in Canadian crops. CSTA agreed to facilitate a value chain process to develop a coexistence plan for conventional, organic and GM alfalfa production, first in the East in 2013 and in Western Canada in 2016. The Best Management Practises are designed to enable producers to continue to have the choice of production system that best meets the needs of their businesses, farming operations and customers.

Definition of Coexistence – CSTA defines a coexistence plan as: “A framework that guides the implementation of  stewardship and best management practices to be employed  in order for three production systems (organic, conventional and GM) to successfully coexist.”

Planning for Choice – A Coexistence Plan for Alfalfa Hay in Eastern Canada/La Planification du Choix – un plan de coexistence pour le foin de luzerne dans l’est du Canada – After almost a year of hard work by a number of participants in the value chain, along with academics and forage specialists, the coexistence plan for alfalfa hay in Eastern Canada is now complete.  Click on the images below for a PDF of the plan.  Under each image is a separate PDF of a checklist that could be used to help employ voluntary best management practices.

Note: while CSTA facilitated this coexistence planning process, CSTA does not “own” the plan. It is the product of a value chain process and has been developed by a number of value chain participants. It is acknowledged that there are very strongly held views on both sides of the debate on genetically modified alfalfa. This plan does not advocate for or against the commercialization of GM alfalfa. Nor does it favour one production system over another. This plan strives to anticipate the future.  Its purpose is to identify possible practices that could allow all hay production systems to be successful in Eastern and Western Canada.   Please ensure that you read and understand the disclaimer at the beginning of the plan. 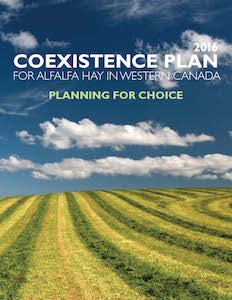 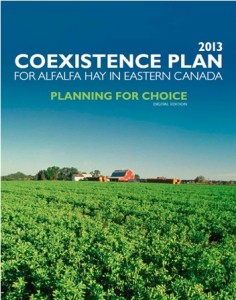 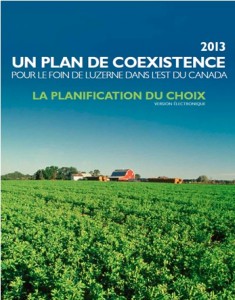